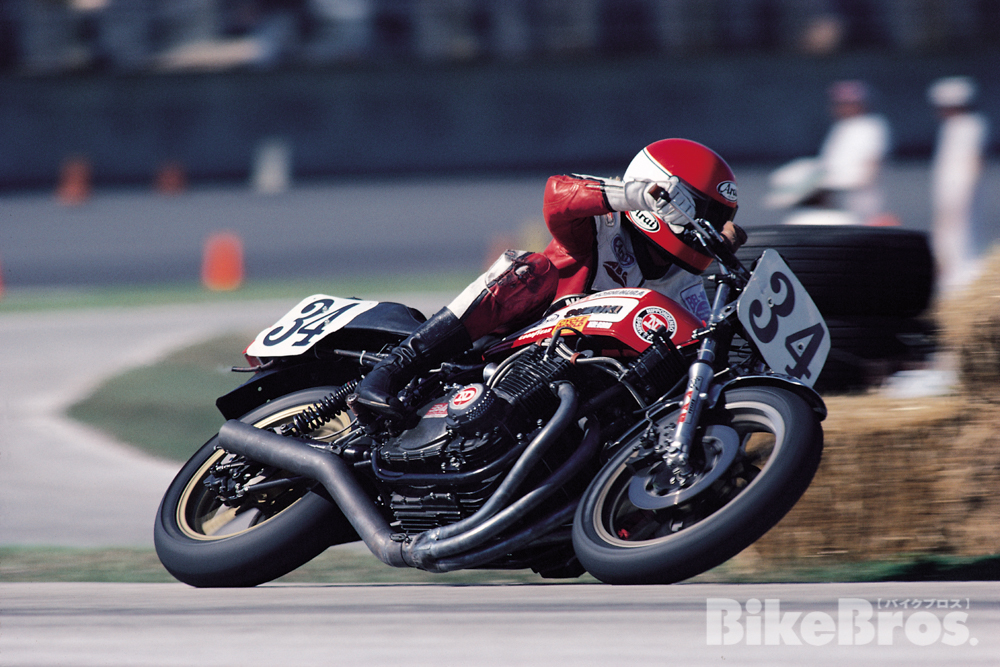 Although not able to secure a 1st place finish — 2nd in Rd.1 at Daytona, 3rd in Rd.2 at Bryar (Loudon), 3rd in Rd.3 at Sears Point and 2nd in Rd.4 at Laguna Seca — Wes Cooley was crowned the 1979 AMA Superbike Champion by finishing on the podium in all four rounds in the season. It was the first Superbike title for both Cooley and Yoshimura.

The victory at the first ever Suzuka 8 Hours endurance race (July 30, 1978) has brought great success and repute to both Yoshimura and Suzuki. The GS1000’s debut win at the 1978 AMA Superbike Daytona Round had certainly marked an incredible achievement in the U.S. but the Suzuka 8H win has further proved domestically as well as internationally the exclusive characteristics of the GS1000 and the engineering supremacy of Yoshimura.

The Superbike version of Yoshimura Suzuki GS1000 used a magneto CDI (internal rotor type), and it had a magneto on the left-hand side of the crankshaft and a CDI unit on the right-hand side. This setup had an electrical output enough to power a small headlight and a taillight on the Suzuka 8H version of the bike, but for the Bol d’Or version, the magneto had to be replaced with a standard ACG (alternator) to power the large dual headlights that are necessary when riding into early September sunset in Southern France. The Bol d’Or night section lasts about 6 to 8 hours, whereas in Suzuka 8H the lights only need to be turned on for about 15 to 20 minutes, 45 minutes at most.

At the 1978 Bol d’Or 24-Hours, Yoshimura Suzuki GS1000 held the 3rd position until about 2 hours into the race, when the electricity failed as the taper fit between the heavy standard ACG and the left-side crank end came loose due to severe acceleration and deceleration. The team managed to keep the bike on the track by repeatedly changing batteries, but retired from the race after 5 hours.

Pop realized that one cannot win a 24-hour race with the same tactics used in a 8-hour race, which is essentially a sprint. In fact, compared to Yoshimura, most of the European endurance racing teams at Paul Ricard — both factories and top privateers — were well prepared in all aspects, from the pit equipment and the catering service for the crew to the buses/trailers for racers to rest. The 1978 Bol d’Or winner was the Honda RCB1000 (Christian Leon / Jean Claude Chemarin) which had retired from the last Suzuka 8H. 24-hour endurance competitions have their own way of competing, and the “invincible fleet” was indeed invincible in its category. 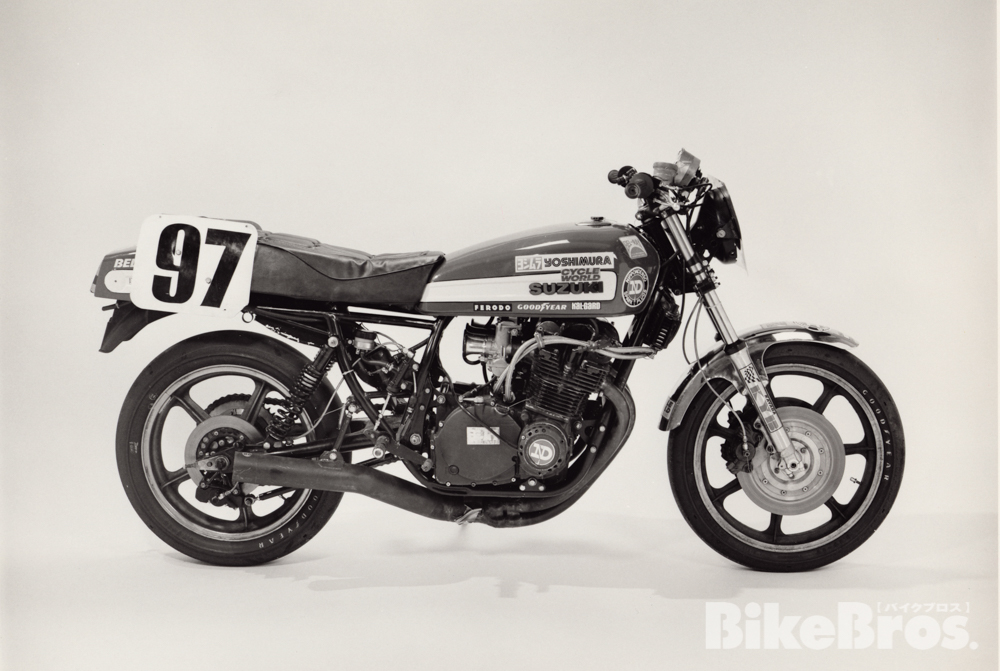 The 1979 AMA Superbike Daytona Round winner, Ron Pierce’s #97 Yoshimura Suzuki GS1000. Following the race regulations (1000cc maximum), Yoshimura stayed with the stock displacement of 997cc (70 x 64.8mm) but with a set of high-compression (11.5:1) 2-ring cast pistons, and loaded the bike with all the tried and proven modifications such as the additional cam chain tensioning mechanism and the special valve lifter buckets & adjustment shims (the smaller Yoshimura shim is placed inside the bucket, while the stock shim rides between the bucket and cam lobe). According to the pre-season vehicle data, the bike has a maximum power output of 133.65hp at 10,000rpm, pulling a curb weight of 204.3kg.

In the 1978 AMA Superbike season, the Yoshimura Suzuki GS1000 & GS750 took four 1st places — by Steve McLaughlin in Rd.1 at Daytona, by John Bettencourt in Rd.2 at Bryar (Loudon), by Wes Cooley in both Rd.4 at Pocono and Rd.6 at Laguna Seca — but the championship was won in a tiebreaker by Reg Pridmore aboard the Racecrafters KZ1000, and Cooley finished 5th in points for the season.

Soon after the 1978 Bol d’Or was over, Pop and his Yoshimura R&D of America promptly started preparing for the 1979 AMA Superbike Series in which the rules were due to be changed to allow racing carburetors. The 1979 Yoshimura Suzuki GS1000 superbikes were naturally fitted with both 4-into-1 pipes (allowed since 1978) and 31mm Keihin CR’s. 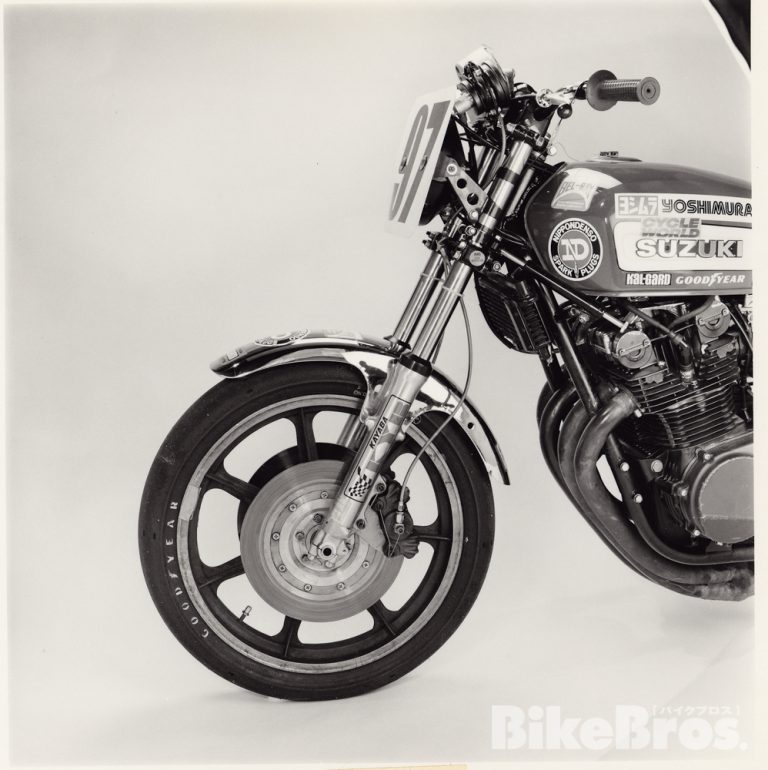 Switching to racing slicks made the bike lean much deeper into corners, so the next concern was how to protect both sides of the crankcase from scraping. Until the AMA rules changed in 1979, the 35mm KYB racing forks were extended by 35mm — by welding a pipe onto the top of each inner tube — in order to increase the lean angle, however, this modification has its downsides as the higher center of gravity affects the handling of the bike. The front wheel is a 19” Morris 7-spoke mag and carries a Goodyear 3.25 slick.

1979 saw more changes to the AMA Superbike. In the Daytona round, the race distance was extended from 50 miles to 100 miles, or 26-laps of 3.87-mile course. The organizer’s intention was to feature a gas stop (refueling stop), which would allow fans to enjoy the sound of howling 4-stroke engines, and this scheme has made the superbike racing even more popular.

For the 1979 Superbike season-opener at Daytona, Yoshimura prepared three bikes for the team of Wes Cooley, Ron Pierce (1978 Bol d’Or teammates) and David Emde. Emde was from a motorcycle racing clan — his father Floyd and brother Don won Daytona 200 respectively in 1948 and 1972 — and was one of Yoshimura’s rivals in the 1978 Suzuka 8H, in which he and his teammate Isoyo Sugimoto took 2nd place riding a Yamaha TZ750D.

In the two qualifying 5-lap heat races, Pierce won the Heat 1 with an average speed of 101.873mph, and Cooley won the Heat 2 as well as the pole position with an average speed of 104.043mph. Emde, however, crashed in the preceding GP250 class race and was diagnosed as medically unfit to participate in the Superbike heat races. He was eventually granted permission to enter the main Superbike race, but had to start from the final spot (grid #63!) on the second wave. 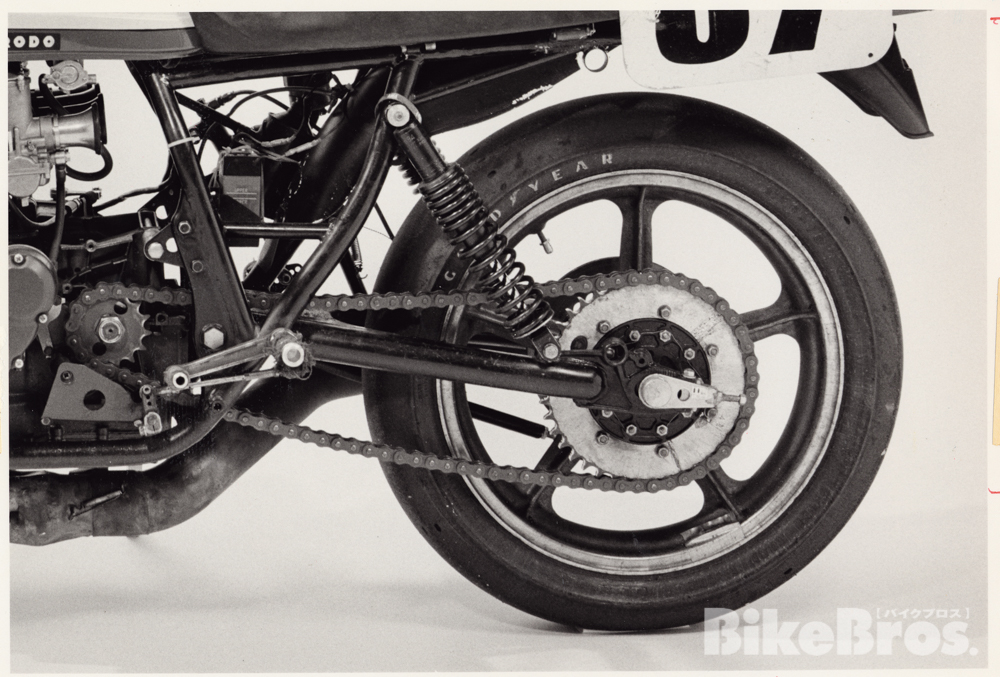 A 54.5-degree lay-down rear suspension setup is composed by modified (bent and braced) subframe tubes, relocated shock mounts and reinforced pivots. The swingarm receives a lower reinforcement brace before the track debut. The rear wheel is a 18” Campagnolo 5-spoke mag and carries a Goodyear 3.75 slick.

Right from the start of the main race Yoshimura team riders Cooley and Pierce took the lead followed by Roberto Pietri on a Yoshimura-tuned GS1000 and Freddie Spencer on a Leoni-tuned Ducati 900SS, until lap 13 when the riders began to pull into the pitlane for refueling (no tire change). Yoshimura team sent every one of its riders back on the track after quick and careful pitwork.

Then suddenly, Cooley, who held the top spot for many laps, overshot the chicane at the end of back straight and traded spots with his teammate Pierce. Cooley was suffering a front brake fade, but cleverly managed to hold onto the 2nd spot.

Also incredible was Emde’s retrieval. He steadily moved all the way up from 63rd position to 5th by lap 19 and 3rd by lap 20! All three riders of Yoshimura R&D of America, Pierce, Cooley and Emde, lead the final laps to the checkered flag and scored a sensational 1-2-3 finish. An extra delight was that Pietri rode his Yoshimura-tuned GS1000 into 4th place. It was a perfect victory for Yoshimura.

Wes Cooley was born in LA in 1956 to a father who was a motorcycle racer and an organizer of AFM (American Federation of Motorcyclists). Wes became the first contract rider for Yoshimura and a star superbiker whose wild riding style — especially his hang-offs and wheelies — attracted many fans. Reflecting his popularity, one of the first replica helmets from Arai was the Wes Cooley replica.

Although there were only four rounds in the 1979 AMA Superbike season, Cooley won his first championship by finishing on the podium in all of them, with Pierce ranking 2nd. Promising young rookie Freddie Spencer who won the season’s Rd.3 and Rd.4 on a Kawasaki factory KZ1000Mk.II (basically Cooley’s machine for the ’78 Season) — as a replacement rider for Mike Baldwin — was recruited by Honda as they were getting ready for their debut as a factory team in the 1980 Superbike season, in which the maximum engine capacity was announced to be raised from 1000cc to 1025cc. Kawasaki was also scheduled to spur their commitment to the Superbike Championship and has already signed a contract with the up and coming Eddie Lawson. And here’s another little surprise: the maximum engine capacity for the Superbike was announced to be raised from 1000cc to 1025cc. 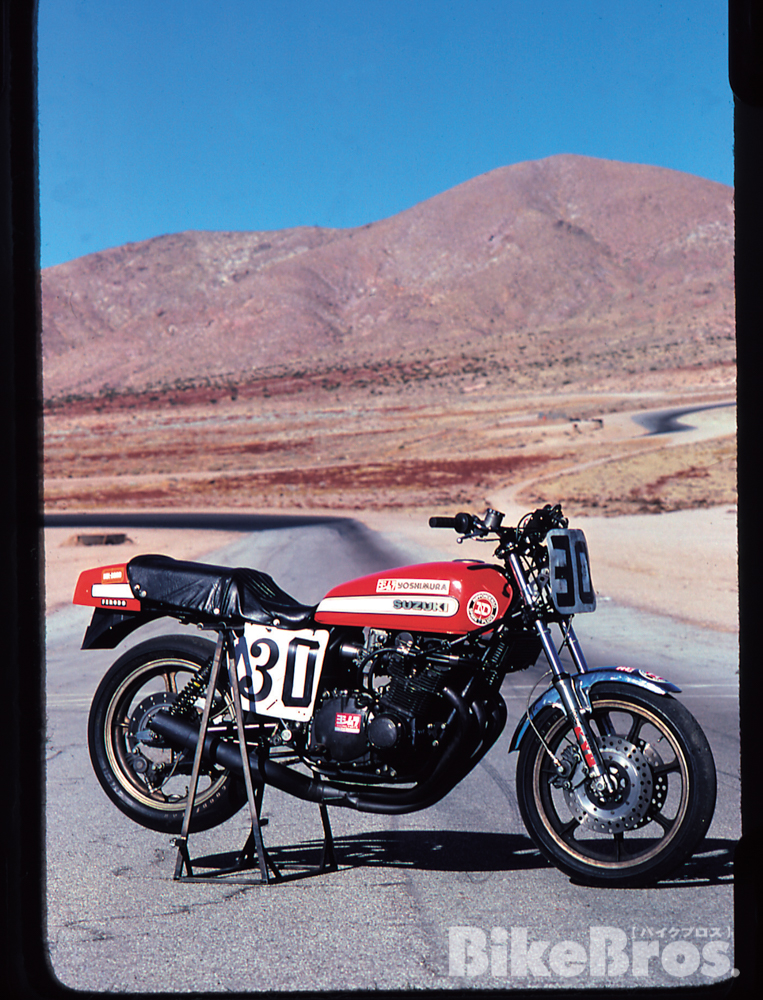 Yoshimura unveiled their GS1000 complete race bike to the friendly media right before the 1979 race season. It was priced at USD10,000 not including the bike.

As for endurance racing in 1979, Yoshimura entered two Yoshimura Suzukis — piloted by Wes Cooley / Ron Pierce and Raymond Roche / Alain Terras — into the 24 Heures Motos (the 24 Hours of Le Mans motorcycle race) in France, but both had to retire from the race, one after a crash and one with an engine failure. Meanwhile in Southern California, a 1099cc Yoshimura-tuned Suzuki GS1000 ridden by two Davids, Aldana and Emde, scored a magnificent victory in the annual AFM Six-Hour (On Any Sunday II 6-Hour Endurance Race) at Ontario Motor Speedway.

In June 1979, right after the 24 Heures Motos, Pop and his wife Naoe returned to Japan to strengthen their business in Japan by transforming Yoshimura Parts Shop Kato (of Shohei and Yumiko) into a limited private company Yoshimura Parts of Japan. Moriwaki had by then fulfilled the contract to produce Yoshimura performance parts, and finally became completely independent from Yoshimura. 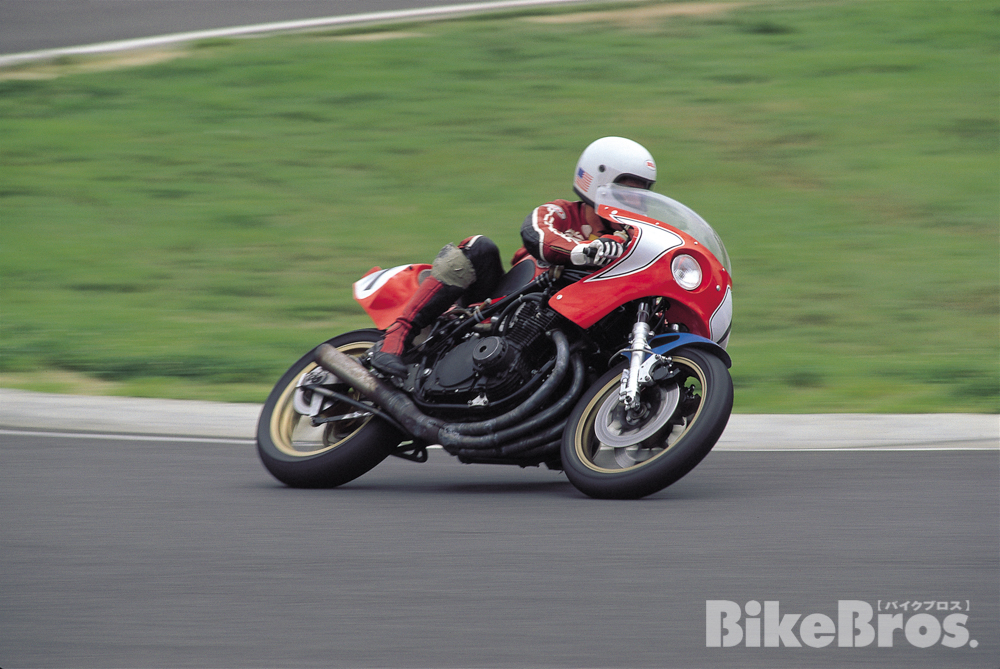 Yoshimura’s 1979 Suzuka 8H bike was built on a racing chassis and fitted with a half fairing, along with KYB suspension originally developed for factory RGs.

1979 Suzuka 8 Hours was a disaster. Yoshimura’s 8H bike for that year was built on a new chassis (specially built at Suzuki Japan for the purpose) with a GS1000 unit tuned exclusively by Pop. The bike was ridden by Wes Cooley / Ron Pierce, who were soon troubled by front brake issues. The bike had to repeatedly make pit stops to bleed the brake fluid but to no avail. And then the engine blew up with a busted crankshaft, leaving a hole in the crankcase. It was guessed that the brake problem was caused by the full rigid engine mounts — the frame was based on those designed for 2-stroke RG500 — which transmitted the vibration of the 4-stroke 1000cc engine through the steering head to the front brake system (1980 Yoshimura Suzuki GS1000R features rubber front engine mounts).

This was how the 1979 season went. In 1980, major endurance racing events including the Suzuka 8H were scheduled to be incorporated into the TT Formula One World Championships (allows freedom of chassis design but must use a street-based 1000cc engine). The AMA Superbike championship contender list is soon to include some serious factory teams from Honda and Kawasaki. The motorcycle road racing scene was becoming even more intense.