Yoshimura Racing was established in Simi Valley in late 1972. Here, Fujio stands in his Southern California workshop, by a CB500 racer built around a frame designed by racer/journalist Tony Murphy.

Less than a year after its first participation in the Daytona 200 in 1972, Yoshimura changed the whole picture of the 4-stroke engine tuning. The modifications they did on the Krause Honda CB750’s —— namely, high-lift camshafts, cylinder head porting and 4-into-1 performance exhaust —— have redefined the inline 4-cylinder engines by establishing the new standard solutions to squeeze out extra power from them. Pop at the time, however, was too busy exploring the possibilities of engine tuning to sit and think about the future.

The Yoshimura 4-into-1 exhaust has created a sensation in the motorcycle scene since its first public appearance at the 1971 Ontario 250-mile road race, and it immediately provoked a wave of imitations from numerous motorcycle tuners and parts manufacturers. Furthermore, the amazing feat at the 1972 Daytona 200 —— leading the first 27 laps of 57-lap race —— has greatly increased the popularity of Yoshimura’s product line-up for the CB750. They were literally selling like hotcakes. 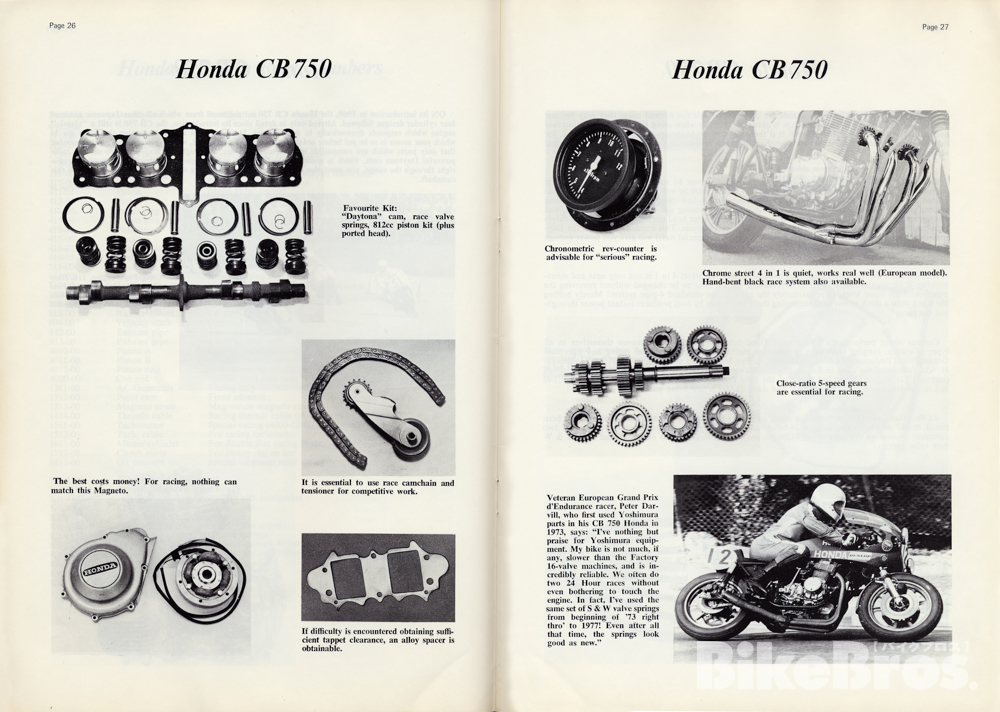 Performance parts for the Honda CB750 were used not only on road racers but also on home-built cafe racers (popular especially in Europe) and were selling like crazy. To respond to the increasing demands, Yoshimura also released race fairing, single seat cowl and aluminum fuel tank for the big CB. 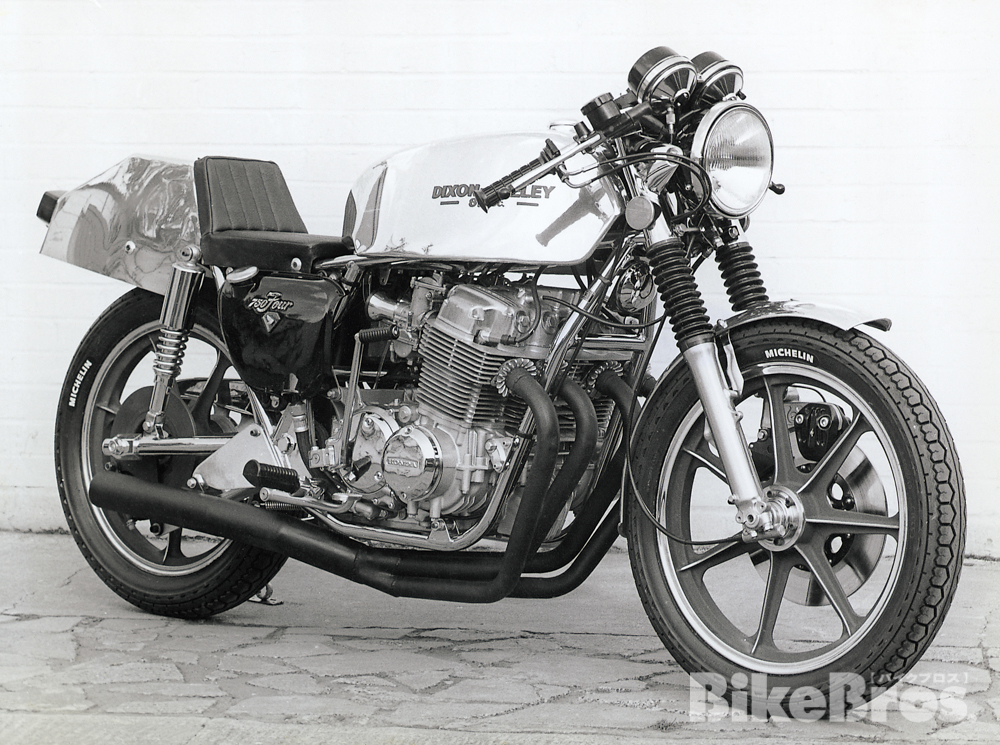 Also in 1972, two American employees at a U.S. military charter operator ??? flight engineer Dale Alexander and pilot Starr Thompson of the Flying Tiger Line —— began to frequently visit Yoshimura in Akigawa. They were in fact secretly transporting performance parts for CB750 (such as high-lift cams and big bore kits) on board for their personal profit. The recent motorcycle race reports covering Daytona, Ontario and the emergence of 4-into-1 exhaust technology were making their side business quite profitable.

Meanwhile, Pop for some time has been thinking about expanding his business to the U.S., as it was an option besides Fussa (Tokyo) when he decided to leave Zasshonokuma (Fukuoka) in 1965. He was now looking at the U.S. as a dreamland where he could make full use of his talent to performance tune large-capacity 4-stroke bikes, since the domestic motorcycle competitions were currently dominated by 2-strokers, and he had already lost interest in tuning racecars. It was then when the two Americans came up to Pop and suggested him to establish a new company in the United States.

As a fifty-fifty joint venture between the Yoshimuras (Pop and Fujio) and the Americans (Alexander and Thompson), the new company was founded in the late 1972 in Simi Valley, in the northwest corner of the Greater Los Angeles Area, and was named Yoshimura Racing. Its clean, spacious workshop was like that of a prosperous American race team or a major dealership such as Krause Honda, and it was otherworldly compared to Akigawa factory. The company started selling 4-into-1 exhaust pipes by the end of the year. 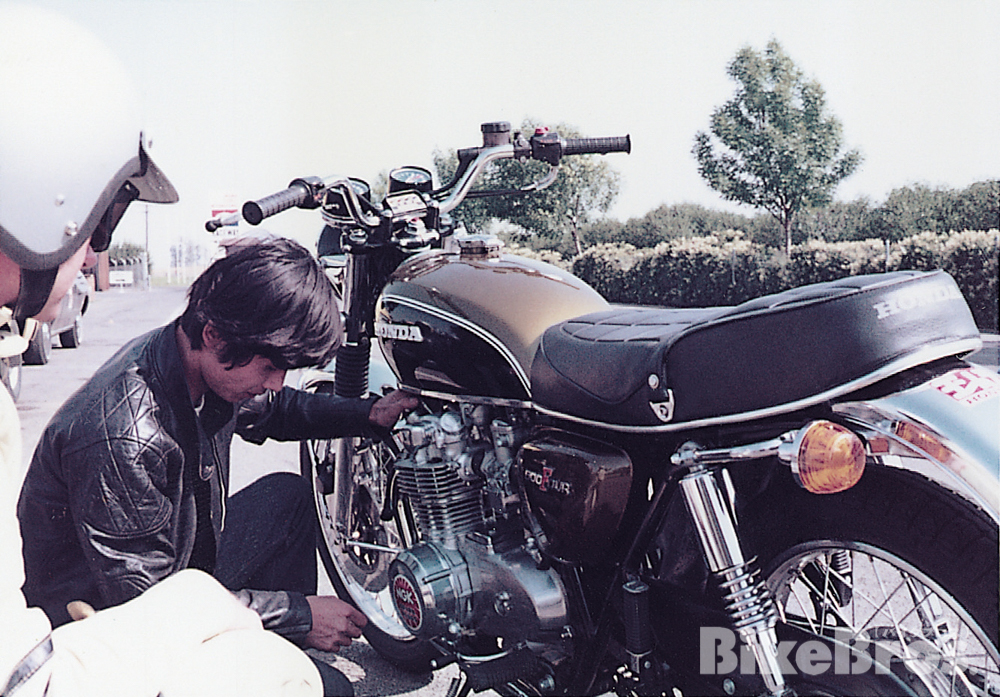 Fujio checks his beloved test mule Honda CB500 Four under the California sun. With the valuable knowledge and experience he gained in Japan with the 4-into-1 exhaust development project for the big CB, he continued as a test rider stateside, testing various bikes including Kawasaki Z1.

Then came the momentous launch of Kawasaki 900 Super Four: Z1. As the first mass-produced inline-4 twin-cam motorcycle, the 903cc Z1 ignited the superbike wars and in that sense changed the course of history for both Yoshimura and the whole motorcycle industry. Its production began in August 1972, 3 months prior to its release in the U.S. market in November of the same year.

“I believe it was around that time when I received a Z1 at the U.S. Kawasaki,” Fujio remembers.

Much to their surprise, Yoshimura was chosen by KMC (Kawasaki Motors Corp., U.S.A.) to try out the new Z1. While it is not clear whether it was an actual production model or a pre-production model (kept possibly for promotional and other purposes), Fujio took the opportunity, picked up a Z1 at the KMC in Southern California and started riding it down the freeway heading towards Simi Valley.

“My CB had more power, but the Z1 had far better engine characteristics, and had less vibration. Top speed was around 130mph (approx. 209kph). I noticed a chassis wobble at the high-speed range, but that was not so different from my CB,” recalls Fujio, referring to the Yoshimura Honda CB750 K0 he used to ride back in Japan.

It is certainly not fair to compare a stock Z1 with Fujio’s CB750 since his was the exact bike that was used to develop the original 4-into-1 exhaust. It was fully tuned with big bore kit, porting, head shaving for higher compression, mirror polished crank & conrods, a high-lift cam, a set of Keihin CR carbs and a 4-into-1 pipe, so no stock bike in production at that time, even the new Kawasaki with a larger displaced twin-cam engine, could match it. The Yoshimura big bore kit for the CB750, however, has evolved from ?64mm (810cc) to ?64.5mm (823cc) then to the final ?65mm (836cc).

Pop was there waiting for him at the workshop. As soon as Fujio returned with the Z1, they opened its cam cover with curiosity and, sure enough, found technological advantages over the CB750. The cam-chain components —— idler, tensioner and guide —— were adequate and well placed, reducing the lash and slack of the cam-chain; which in turn made it easier to achieve the desired valve timing and keep the proper cam-chain tension for better endurance.

Following the inspection, cylinder head was removed for tuning. The base circles of the stock cams were ground down —— oil stones were then used to finish the cam lobes —— in order to increase the amount of cam/valve lift. The stock valve stems were too short for the smaller base circle, but they were able to fix the problem by installing thicker tappet shims. The intake and exhaust were ported. They kept the mufflers stock but removed all the baffle tubes.

“We immediately got an extra 10mph with stock bottom end including pistons, and it revved over 10k rpm. We’ve done it in a couple of days.”

It was rather a “modest tune” for Yoshimura, yet the result was still quite impressive. It made them confident about tuning the Z1 and about what was coming. They felt the approach of a new era, in which the twin-cam 4-cylinder engine will be the standard for big bikes. This particular bike, the first of Yoshimura-tuned Z1’s, was then returned to KMC who wanted to compare it with a stock Z1, and its whereabouts now however is unknown. 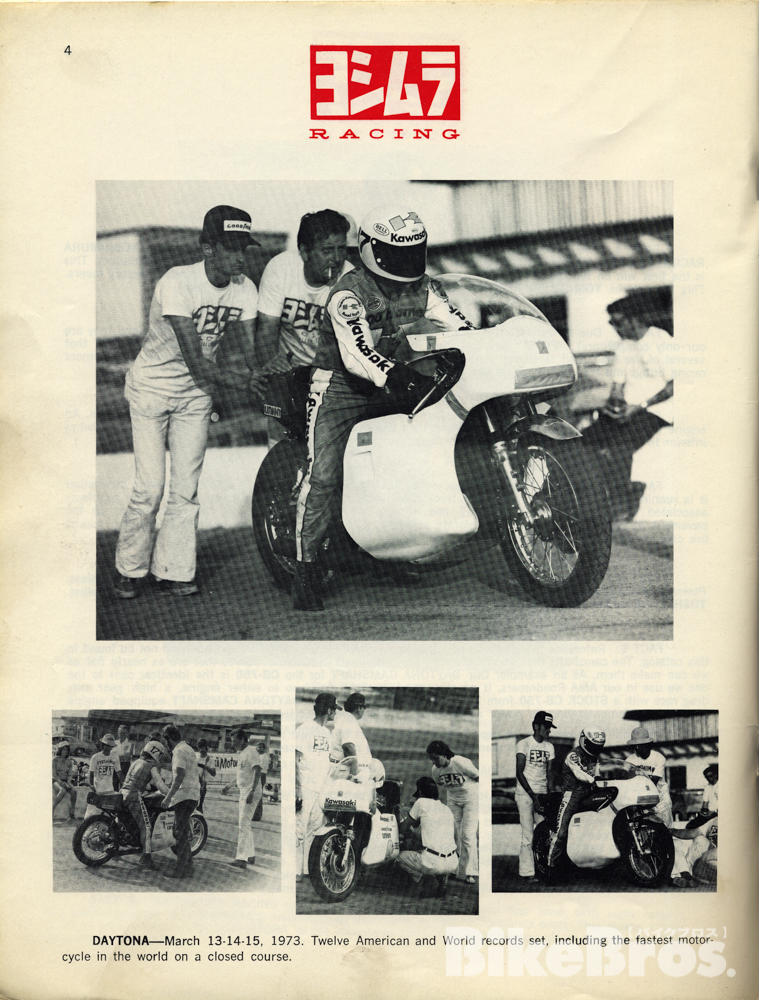 Kawasaki speed challenge at Daytona Speedway, March 1973. The fully faired Z1 ridden by Yvon Duhamel was fitted with a Yoshimura-tuned engine, and Fujio supported the event as a mechanic.

After reconfirming what Yoshimura are capable of, Kawasaki requested Yoshimura to tune another Z1 engine for their attempt to break world speed records at Daytona International Speedway (using only the outer 2.5-mile tri-oval with 31-degree banks) which was scheduled for March 13 to 15 of 1973, right after the Daytona 200.

The Z1 engine was tuned in Japan by Pop himself and delivered to Kawasaki Heavy industries in Akashi, from which it was shipped to KMC in the U.S. and then to Daytona. Although its pistons and bottom end were stock, it was equipped with a fully-tuned head, a set of CR carbs and a 4-into-1 exhaust pipe.

KMC brought three Z1’s to Daytona, including one sprint version which they built around the Yoshimura-tuned engine and equipped with an unpainted (white) full fairing, a cowled single seat, a pair of clip-on handlebars, a set of heavy-duty rear shocks and a set of grooved Goodyear racing tires. The other two Z1’s were basically stock except for clubman handlebars, heavy-duty rear shocks and Goodyear racing tires to ensure safety during high-speed endurance runs.

KMC ace rider Yvon Duhamel was assigned to challenge the closed-course one-lap record (going for the world’s fastest average speed per lap) with the sprint version. The two stock versions were after the 24-hour endurance records. One of them was ridden by top riders Gary Nixon and Art Baumann, along with KMC employee Bryon Farnsworth and Motorcycle Weekly editor John Weed, while the other one was ridden by racers Hurley Wilvert and Cliff Carr, along with Kawasaki Japan factory rider (ex-Yoshimura rider) Masahiro Wada and Cycle Magazine editor (1977 AMA Superbike winner) Cook Neilson.

“Kawasaki must’ve been pretty confident about their bikes, because they let not only the racers but also those magazine editors ride the bikes!”

Fujio was there, with a group of Yoshimura Racing mechanics, setting the Z1 sprint version up for the challenge. 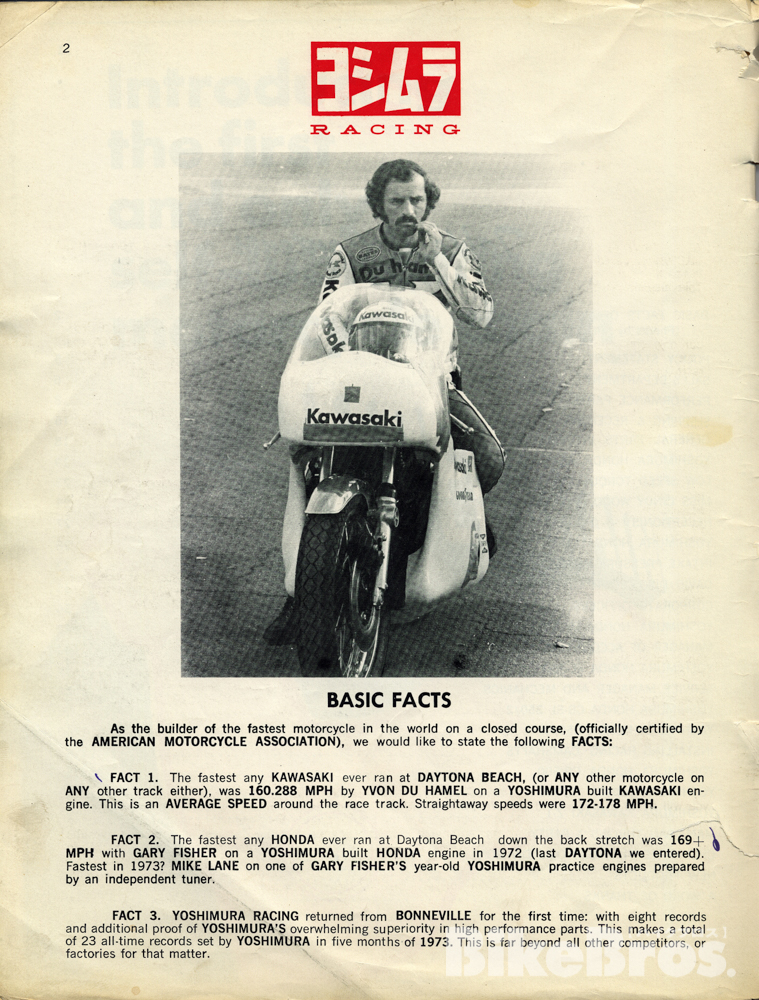 Yvon Duhamel sits on the Kawasaki Z1 sprint version powered by a Yoshimura-tuned engine. The Z1’s success in breaking world records was reported throughout the world and paved the way to the top of the motorcycle world. Yoshimura too proudly advertised the accomplishment in their ads and brochures. 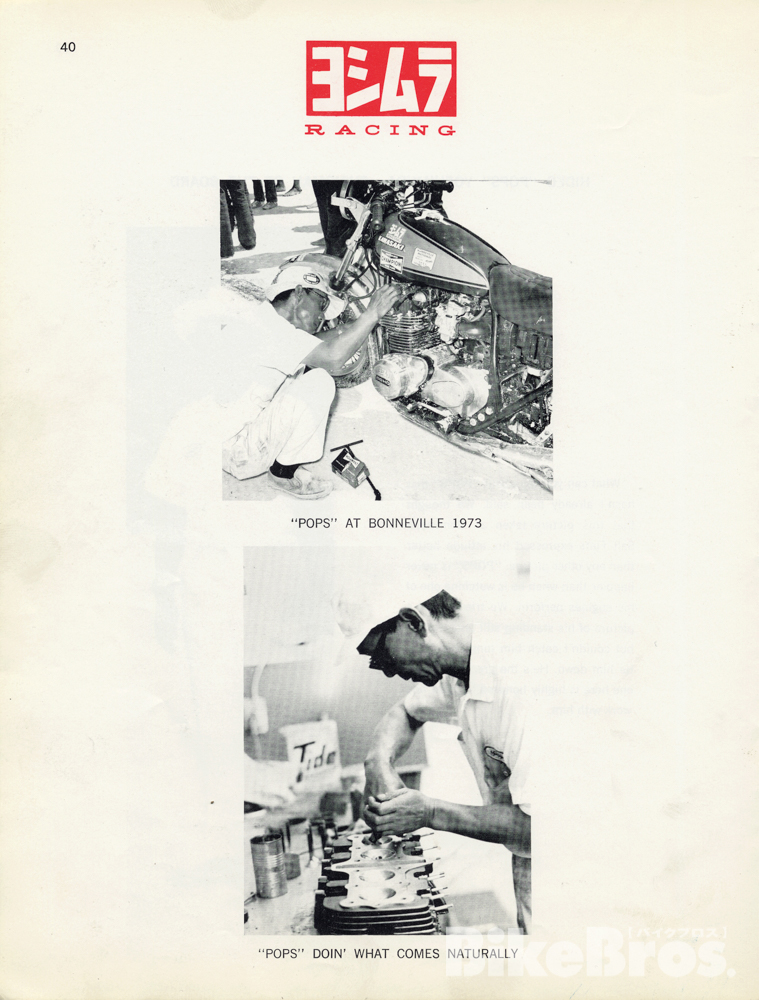 Pop in the USA, working on a Kawasaki Z1 at Bonneville (above), and on a cylinder head at his workshop in Simi Valley (below). He gradually began to earn recognition and respect in the States through how he radically transforms the CB750 and the Z1.

In August of the same year, Yoshimura took four bikes —— including a Z1, a CB750 and a bored-out CB500 —— to Bonneville Speed Week in Utah. Under Pop’s leadership, and with Dale Alexander at the controls, Yoshimura succeeded in breaking seven world speed records on the famous Salt Flats.

The next challenge was in Europe. Kawasaki trusted Yoshimura to tune their Z1 engines for the 1973 Bol d’Or 24-hour race, which was scheduled for September 22 to 23 at the Circuit Bugatti in Le Mans, France. In Europe, especially in France, the popularity of endurance race exceeds that of Grand Prix, and because endurance racers share engines with production models, the bike that wins an endurance race will also wins a sales battle against rivals.

To promote the new bike and strengthen its position in the European market with a Bol d’Or victory, a batch of Z1 engines were sent from Kawasaki’s Akashi plant to Yoshimura’s Akigawa factory at which Fujio and mechanics applied their proven tuning methods on them, while Pop was busy working on other projects at Simi Valley. Raw camshafts (genuine hollow blanks for the early Z1) were also provided for Yoshimura to work on using their mechanical camshaft grinder in Akigawa, eliminating the need for stellite welding and grinding. This is however the most appropriate process to mass-produce precision camshafts and it eventually became standardized.

Fujio was then dispatched to France as an engine mechanic, and four of the six Kawasaki Z1’s outfitted with Yoshimura-tuned engines successfully grabbed 2nd, 4th, 5th and 7th overall places at the Bol d’Or. While the 1st place was taken by a CB750 (969cc) of French Honda importer Japauto, it was indeed another international success for Yoshimura. 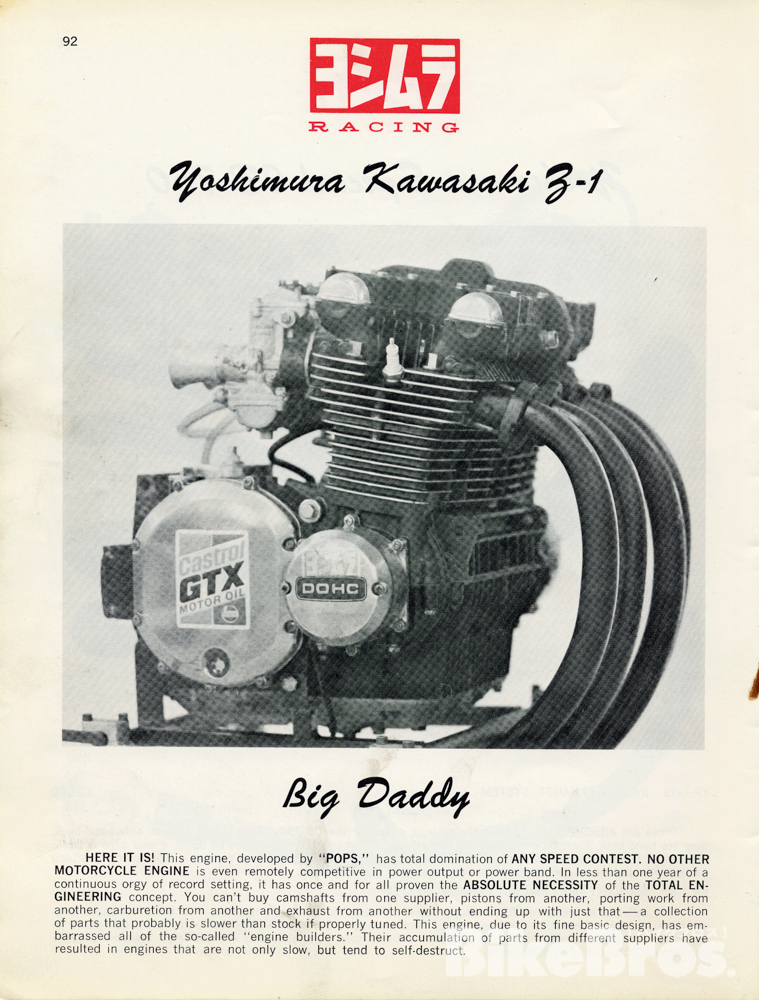 Yoshimura performance parts lineup for Kawasaki Z1 became a huge hit, just like the one for Honda CB750 Four. During that time period, Yoshimura also developed a range of aftermarket parts for CB500 Four and Honda minibikes (such as XR75) that were popular in the U.S. market; and began producing high-performance camshafts from billet blanks.

In the U.S. it was the dawn of production racing, and both 2-strokers and 4-strokers are now given an equal opportunity to shine in a different setting. In the first AMA Superbike Production race —— held at Laguna Seca Raceway in California on July 28 as a supporting event for the 1973 Road Racing Series —— Yvon Duhamel took his near-stock Kawasaki Z1 to the top step of the podium. The trend was great for the tuners such as Yoshimura, but unfortunately, there was something fishy going on in Simi Valley.