“You boys stop fooling around! Get your act together!”

In 1954, Hideo Yoshimura opened a little motorcycle workshop in Zasshonokuma, a southern Japanese town near Itazuke U.S. Air Force Base. Its homely atmosphere, along with Hideo’s fatherly care and thoughtful admonition, quickly made the place a comfortable hangout for young GI bikers. In their new Far Eastern home, they began to fondly address Hideo as “Pop,” and the nickname “Pop Yoshimura” has stuck with him ever since.

My memory of Pop Yoshimura

His effort toward the first endurance race was enormous. This is because there was the biggest opponent ever which was Team Honda RCB. Everybody was pretty positive that Team Honda will get the first checker flag. This challenge was like climbing the Mt. Everest without the oxygen masks or crossing Sahara desert on your feet, but not POP. He always had a challenging spirit and never thought of the word “losing”. Without challenging, he thought there was no word such as “impossible”. Instead, he only had the word “Victory” in his mind. He brought two of the American riders, Wess Coolie and Mike Baldwin, to Team Yoshimura. Their communications between the few elite mechanics were excellent. When I stepped into the pit, I thought POP looked very comfortable and felt the energy coming out from his body. Everybody had a pessimistic thinking about this race and everbody was just thinking of one thing which was same as POP, the first checker.

Honda RCB easily destroyed themselves. I thought it was the challenging spirit which led them to success. I thought it was absolutely important to have such feeling in order to win the race. This kind of feeling also resembles to our daily life.

Next year, the 8hours endurance race will have 20th anniversary. * It will be 20 years after the first win in Suzuka. We cannot see POP in the pit anymore but his spirit and policy will be in Team Yoshimura eternally. Next year’s 8hour endurance race will be really interesting! (* This writing is written in 1996.) 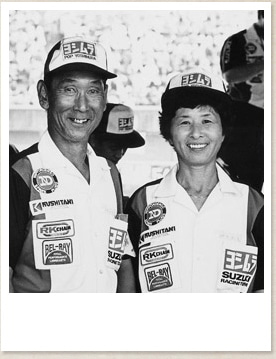 – Profile : Yoko Togashi –
Born in 1954. Translator and Free writer. With the experience of participating in Road race, completing 9000km South American Patagonia race, she started to write about Kenny Roberts and Freddy Spencer in 1983. She is also interpreting in Honda HRC of the foreign riders.
The example of books are like, “We’ll win sometime” (Tokuma Shoten), “Honda NR History” (Sankaido), and “Legend of POP YOSHIMURA” (Kodansha).

On one side of partition (1 entrance of 5.4 meters in depth) in his older brother’s factory (Yoshimura Steel), POP’s shop, although small, attracted American’s from the nearby Itamura Air Base (presently Fukuoka Airport) due to his English speaking ability and the service of fixing engines. The shop itself had no specialized machines, however since there was a welding machine, and other various heavy industrial machines, it was not an inconvenient place to do work. Since the Americans from the base were paid a fixed salary the dollar was strong, and they didn’t have to pay taxes, they flocked to the shop to buy cheap bikes. From unwrapping the bikes purchased by the Americans, to standing them up, to making them run correctly, the shop had become the source for bikes for the Americans. POP had even placed a sign for Kyushu Balcom Motors, however, he couldn’t sell even one of his 4 BMW’s. After the Korean War, the economy worsened. This means that even if the new model comes out, they could not afford the new machine. This is the reason why the bike riders took care of their bikes well.

POP, looking doubly satisfied, earnestly polishing the port. At his favorite circuit. In the middle of the Fuji 1,000km race. More than anything else, the greatest concern is the engine tuning. and when the machine is ready of for the circuit, it is an alternation of joy and sorrow at the result of the race. Although, POP was worrying about these things day in and day out, repeatedly expending energy, he had an immeasurable source of power. For a normal person rest would have taken precedence. However, there were no moderate words for POP’s work, there was only pursuit. It was as if there was a goddess of victory waiting for him, or a state of pleasure which no one but POP could see. At this time, his trademark was NGK cap.

The staffs of Yoshimura also increased to 10, but there were no breaks from work. He was only able to average 3 to 4 hours of sleep a night. Even to make 1 cam-shaft, the grinder was set by hand, the shaft placed in the engine to check the timing, and manually adjusted if the timing was off. He worked on this for a whole day, without which, he could not rest easy. No matter how unfortunate or sad they felt about the work, there was nothing else he could do, so eventually he would do the work again. Even during this time, when he had a small chance to ride his bike near his home, he would feel better. Strangely POP is wearing a Honda cap. (around 1968)

Due to the burn from the fire on 1977, he could not attend Daytona but on 1978, all of the Yoshimura family came to Daytona with new machine GS1000. His younger daughter, Yumiko, got married with Shouhei, Kato(left) who is the owner of Yoshimura Parts Shop Kato at Atusgi, Kanagawa. His older daughter, Namiko, got married with Mamoru, Moriwaki(right) who is owner of Moriwaki Engineering at Suzuka, Mie. They were both excellent riders and excellent tuners. This year was first time for Kato to challenge the AMA Superbike Race as a third man from Yoshimura with GS750. Moriwaki did the modification to the frame of Wess’ Z1 and totally changed the handling. And also this year was the first time for Yoshimura to use their new exhaust so everybody was saying that “Yoshimura is doing something illegal because they are too fast”. His son,Fujio Yoshimura, and two step sons made him really comfortable and POP got his smile back.

At Crosby, POP continued to calculate how to continue racing the final 2 hours of the race. With chalk used for the sign in the pit, he feverishly wrote on the floor of the pit, the amount of time he had calculated. Even this was probably somehow a link with God. Although his calculations were not as deep as a computer’s, POP’s head was a calculator of how to win the race. And BINGO, victory was right there.