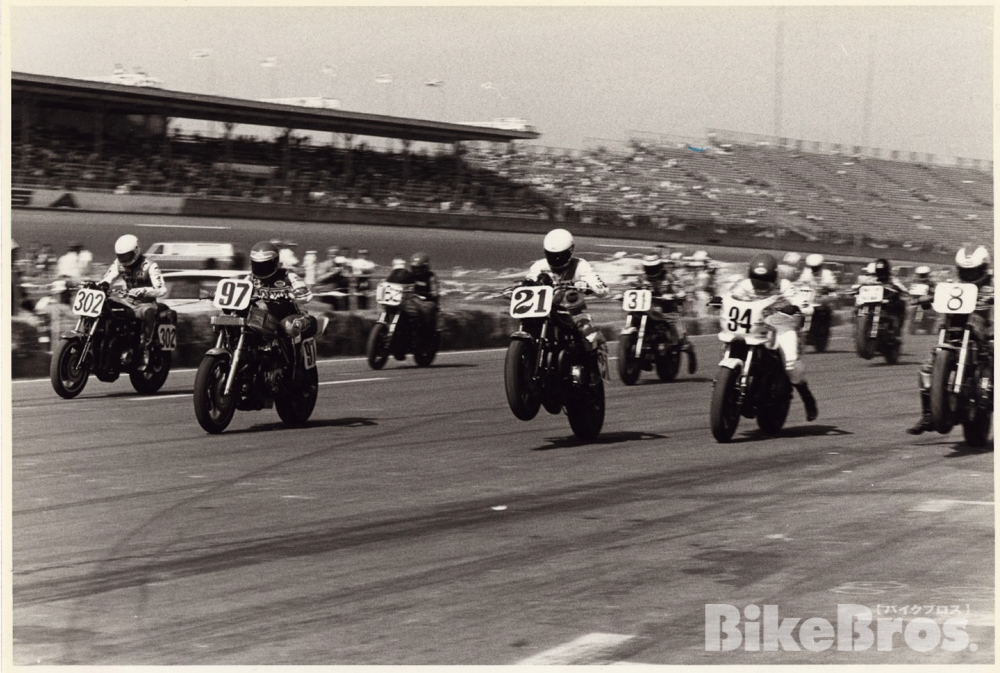 Yoshimura History #15: The Crankshaft that Swept the Daytona

Pop seldom drank alcohol. But that evening he was in a bad mood as Honda America announced to enter the AMA Superbike championship in the 1980 season, with a full-scale factory team including 18-year-old prodigy Freddie Spencer as the ace rider, three ex-Yoshimura riders Steve McLaughlin (also serves as an advisor), Ron Pierce and Mike Baldwin, two ex-Yoshimura mechanics Joe Bito and Mike Velasco, and an arsenal of CB750F’s based on HRC RS1000 TT-F1 (Tourist Trophy Formula One) racer. And, although not as committed as Honda, U.S. Kawasaki has been fielding a factory Superbike team since 1979 season, with ex-flattracker Eddie Lawson on KZ1000Mk-II.

AMA Superbike has since the beginning been an event organized by and for motorcycle race enthusiasts. The regular Superbike entrants, both riders and teams, have developed a sense of comradery through making rules and racing each other, and have been sharing many things including tuning experiences. It was a good old American “club and family” thing, rather than a pragmatic “business and money” kind of thing. Pop was deploring the fact that the major manufacturers are bringing their business decisions and pressures to racetracks. Although at the same time, Pop was feeling the spirit of defiance —- a fighting spirit —- within his soul.

The rules and regulations have changed too. The Superbike displacement limit was raised from 1000cc to 1025cc following the huge popularity of Kawasaki KZ1000 (1015cc stock or 1025cc overbored). AMA also changed the Formula One (the premier motorcycle road racing class formerly known as Formula 750) displacement limit from 750cc for both two-strokes and four-strokes, to 500cc for two-strokes without intake restrictors, 750cc for two-strokes with 23mm intake restrictor plates, and 1025cc for four-strokes. A batch of Suzuki GS1000R factory TT-F1 racers (997cc with φ70×64.8mm) were accordingly converted into AMA Formula One specials (1023cc with φ70.9×64.8mm). 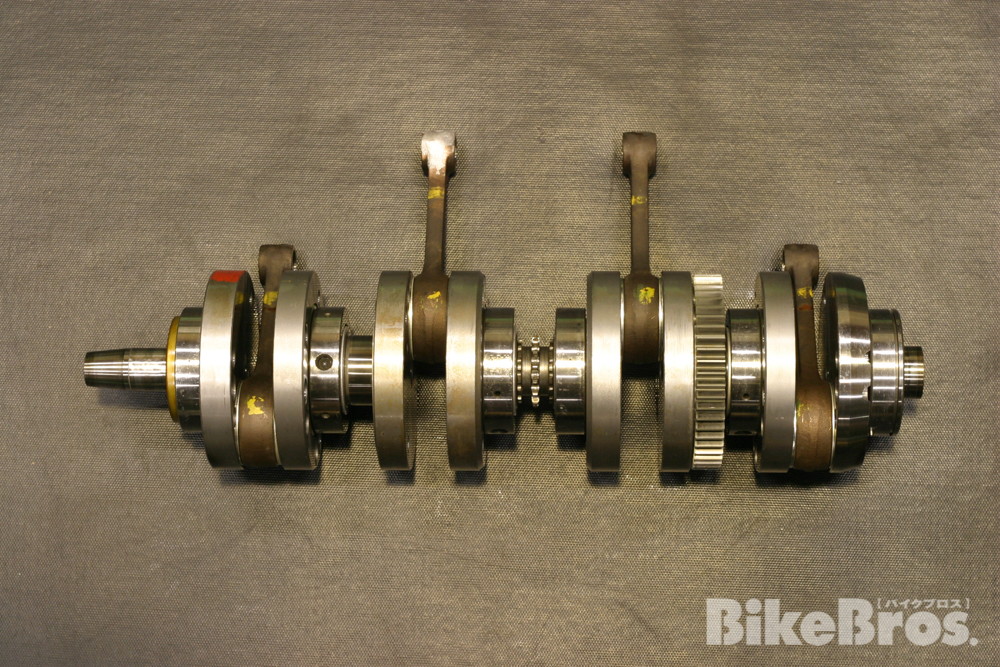 The welded crankshaft for XR69 factory racer was produced by Suzuki Japan and designed after Fujio’s welded crankshaft. One of the most notable modifications from the standard crankshaft is the primary gear which has been converted from helical to spur. A helical gear has advantages in noise reduction, whereas a spur gear provides more strength and transmittance efficiency.

World Championship racing has also changed drastically in 1980, as the world’s major endurance races including the Suzuka 8 Hours became Endurance World Championship Series and the FIM (Fédération Internationale de Motocyclisme) had decided to make it exclusively for TT-F1 machines. TT-F1 is a category that features a wide range of modification, with free chassis but with production-based 601-1000cc four-stroke / 351-500cc two-stroke engines, and it has already incorporated into the Suzuka 8 Hours’ racing categories in the previous season. The year 1980 was also when Suzuki and its French subsidiary Suzuki France formed SERT (Suzuki Endurance Racing Team), then lead by Dominique Méliand. For their first season the SERT would be racing with a XR69 (GS1000R) powered by a 997cc Yoshimura-tuned GS1000 engine, which would also be used by Yoshimura team in the 1980 Suzuka 8H.

For the 1980 AMA Superbike, Yoshimura team prepared the new Suzuki GS1000S (later known as the Wes Cooley Replica). All of the bike’s lighting was removed and the original headlight fairing was converted from handlebar mount to frame mount —- leaving just enough steering angle for a race bike —- to minimize the moment of inertia around the steering axis and further improve handling agility.

The GS1000S, however, had a considerable issue with crankshaft. The problem was that the crankpin fittings (fillets) tend to loosen due to engine vibration at high revs, which is primarily caused by crankshaft runout. Suzuki engineers were well aware of the issue and had developed a countermeasure crankshaft (called Suzuki Super Lock) with reinforced fittings during 1979 season, but it still could not withstand the amount of power Yoshimura was extracting from the engine.

The crankshaft kept falling apart, even during the pre-race practice sessions for 1980 Superbike Championship’s season-opening Daytona round. As soon as the Daytona Speedway garage closed at 8:00pm, Fujio and six Yoshimura mechanics —- including Kunio Asakawa who flew over from Japan —- hurried back to their motel room, put the beds away, making the place into a temporary workshop where they stayed up all night replacing the broken crankshafts. This kind of feat has been an everyday thing for Yoshimura, but the team at that time was working on a total of six Superbikes —- for ace rider Wes Cooley, supporting rider David Aldana and guest rider Graeme Crosby –––– plus a XR69 Formula One race bike (1023cc GS1000R). It was one of the toughest seasons for Yoshimura race mechanics. 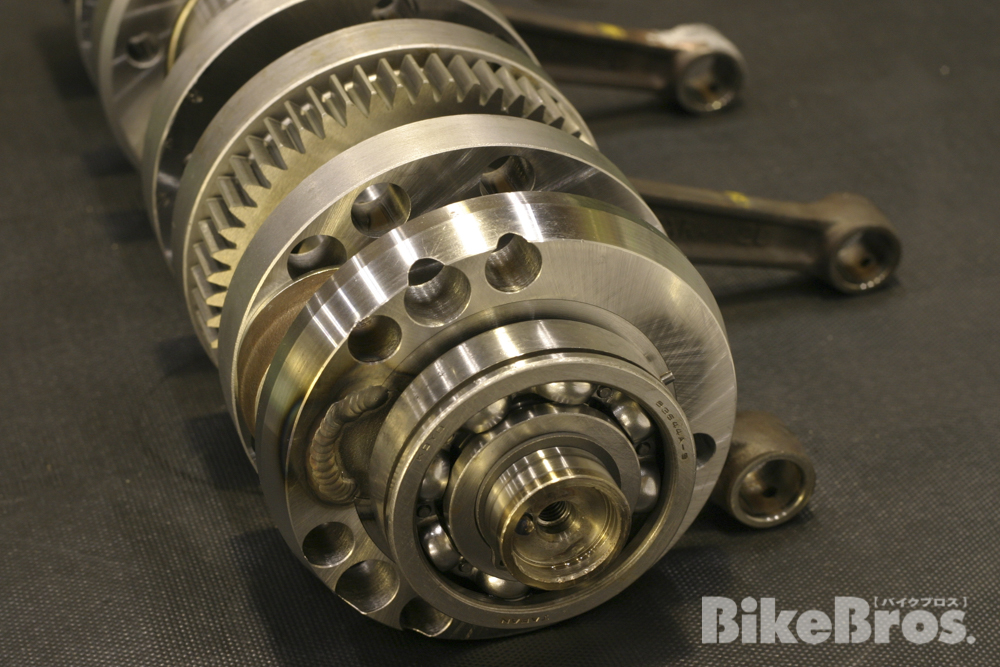 A groove weld along a crankpin fitting is visible in this closeup shot of a XR69 crankshaft. The welding is done in a half circle instead of a full circle, obviously with an intention to minimize heat strain. Disassembly is not considered here, since these crankshafts are not intended to be repaired.

Fujio, who was worried about the fragility of the assembled crankshaft, had brought three modified crankshafts with him. These special crankshafts featured welded crankpins which were expected to reinforce the press fittings. Welding on such delicate pieces certainly involves the risk of heat deformation and thermal stresses, but it was an either/or situation. The modification was accomplished by focusing on durability rather than balance, and they worked great on the Speedway.

The contract deal with Graeme Crosby was another source of trouble at 1980 Daytona. Following his achievements as a Moriwaki team rider in 1978 and 1979, Crosby has signed with Suzuki Great Britain to race in the GP500 class. He then signed a contract with Yoshimura R&D to race Superbike in Daytona, but just 10 minutes before his Superbike heat race begins, Suzuki GB team sponsor Champion Spark Plugs made a complaint that it is a breach of contract because one of Yoshimura’s technical sponsors was their rival ND (Nippon Denso, now Denso). After all, Crosby was tentatively considered as a “Suzuki rider” and eventually ran the race on a Yoshimura Superbike machine with ND stickers. 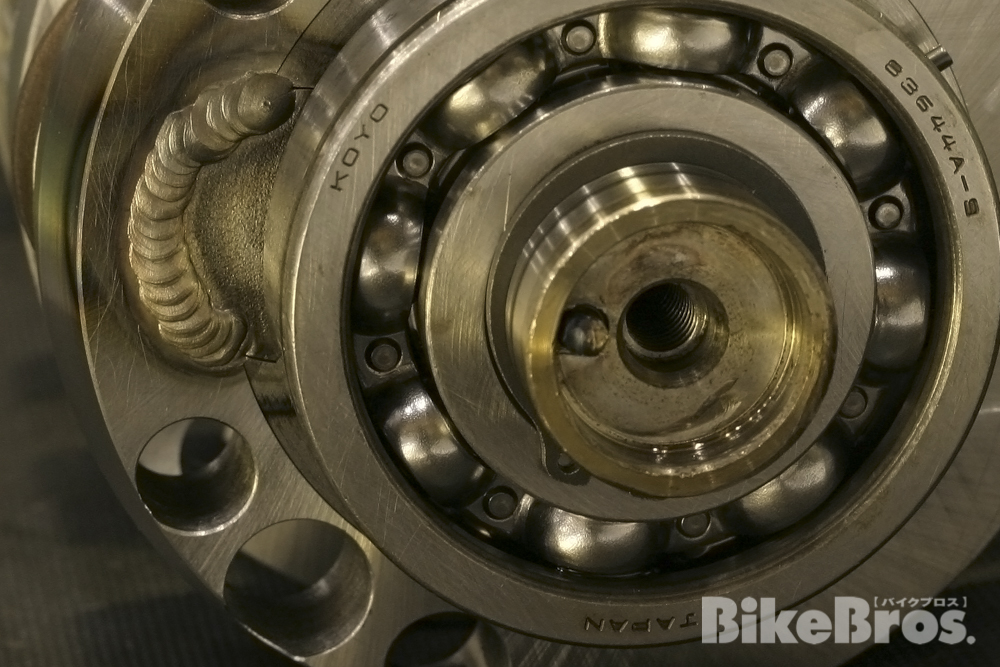 All the bearings on the crankshaft were also modified. The ball bearing on right end was made by Koyo, which is now a brand under automotive components manufacturer JTEKT Corp.

In the heat race which determines the starting grid for the main race, Aldana and Crosby crossed the finish line on the 18-degree Daytona banking in a 1-2 formation, but were considered as “retired” because they both returned to pit lane before reaching the timing line at the first corner (it happens!). Consequently in the main race, Crosby was placed 49th on the grid among 60 competitors, in the second wave (the slower group) of a two wave start, in which he would start with a 10-second delay and a 100-meter handicap.

The main race was initially led by Cooley (GS1000S) and Spencer (CB750F), but by Lap 10 they were caught up with Crosby who came all the way up from the second start wave. Crosby soon became Yoshimura team’s only hope in the race since his teammates were forced to retire from the race: Aldana in Lap 6 with a flat front tire, and Cooley in Lap 10 due to a broken crankshaft. Crosby took the lead in Lap 10 when Spencer pitted for fuel, then relinquished the lead to make his fuel stop at Lap 13, but took hold of the lead from Lap 15 onwards and set a new course record while doing it. After completing a total of 100 miles and 26 laps of Daytona, and perhaps because it was extended from 50 miles in the previous 1979 season, Crosby earned his first Daytona victory and brought Yoshimura three consecutive wins in Superbike Daytona round. The second and third spots were occupied by Honda America riders Spencer and Pierce.

And the fourth and fifth spots were taken by Moriwaki riders Masaki Tokuno and Pat Eagan. 1980 Superbike Daytona round was truly a great success for Yoshimura-Moriwaki family. 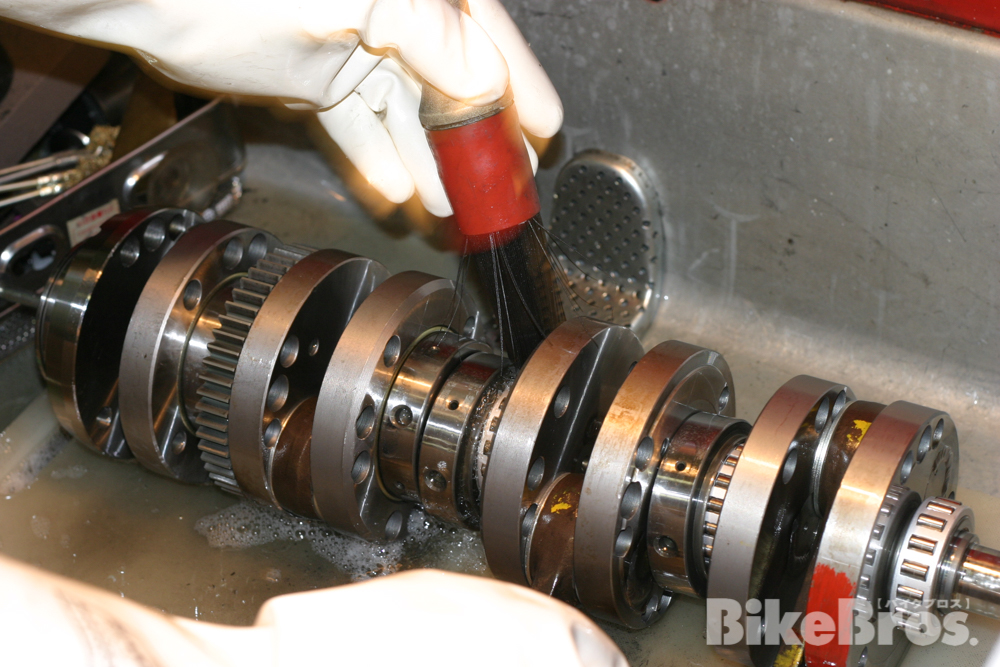 Then two days later on Sunday, Aldana took 6th spot —- top four-stroke finish —- in the 1980 AMA Daytona 200 riding a GS1000R (1023cc). Cooley and Crosby had to retire from the race, but Cooley for a while led the race ahead of Yamaha two-strokers (YZR750 factory racer and TZ750D production racer), causing a sensation among motorcycle fans. As a result, the team succeeded to maintain the reputation of both Suzuki and Yoshimura.

Following the successful Daytona weekend, Suzuki Japan developed a series of XR parts (special parts for Suzuki factory racers), including a set of welded crankshaft, connecting rods and bearings which were designed after Fujio’s crankshaft. 1980 was a year of drastic change and there were even more surprises to come. The transition in the motorcycle racing scene was accelerating and everyone concerned was desperate to keep up with the speed.